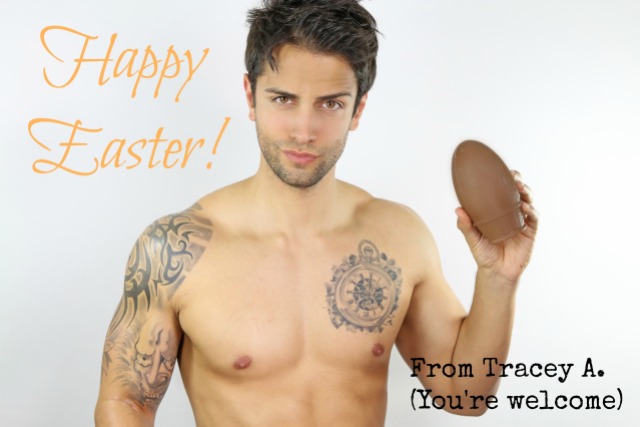 Sorry, was I deceptive in leading you to believe this tall glass of chocolatey scrumminess was my Easter giveaway? Ooops. My bad. He’s miiiiiiiiiiine. 😉

However you’re spending your long weekend, I hope it’s filled with friends, family, and lots of Hot Cross Buns and Easter Eggs. Oh, and one of my US friends here in NZ said she had no idea what Hot Cross Buns were (and I’m assuming she may have been thinking about the hot guy above in a grumpy mood and facing the other direction, if you know what I mean…) so I thought I’d include a photo of what we Kiwi’s mean by ‘Hot Cross Buns’. 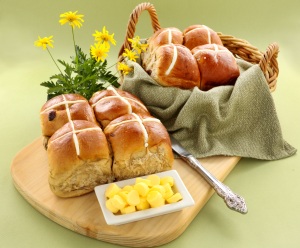 My second Due South book, Melting Into You, features an Easter Gala and part of that is an opportunity for the men of Oban to prove themselves with the ‘Due South’s Manly Man of the Year contest.’ Yeah, the guys are really keen to experience public humiliation, but it’s fun. 😉 Here’s an excerpt of a scene where the heroine, Kezia, witnesses the hero, Ben, showing off his prowess of unhooking a ladies undergarment…enjoy! 🙂

Kezia jumped and looked up at Piper. “Gesù! How long have you been there?”

“Long enough to observe you checking out the talent.” Piper wriggled her eyebrows.

Piper snorted. “Kez, you may be a widow—but you’re not old and you’re not blind. Don’t even think of telling me you weren’t ogling Kip’s ass in those tight Levis.”

Actually, she’d been ogling Ben’s ass, but she’d take the fall for Kip to get Piper’s snoopy-cop nose off her case. “Busted. He’s probably going to win.”

“Nah, my money’s on Noah. The man’s got hidden depths.”

Kezia glanced over at Oban’s only full-time officer. Dark hair trimmed short and built like a rugby full back, Noah gave nothing away as he scanned the horizon. He was popular with the locals, and with his slightly unapproachable and mysterious aura, even more popular with women. Though their interest seemed to ping off him like bullets off body armor.

“You’re not supporting your own brother?”

“In a bra-removing contest? I can’t begin to tell you how wrong that would be.” Piper kept her gaze fixed on the men lined up by the mannequin, which Joe had loudly dubbed “Siobhan.” “Besides, since I heard you and Ben hang out a lot, I thought you’d be rooting for him.”

Kezia’s eyes narrowed on her friend’s bland expression. Her cop face. “What are you implying?”

“Nothing.” Piper’s hazel eyes widened. “Should I be implying something?”

“Zoe and Jade spend a lot of time together, so as a result, I’ve seen more of Ben than usual.”

“Uh-huh. You’ve got kind of a tic thing going on there, Kez.” Piper touched Kezia’s cheekbone, beneath her right eye. “Classic sign of untruthfulness.”

“You’re not a cop anymore, Piper.”

“And you’re not telling me the full story—don’t make me beat it out of you.”

Kezia pulled away from Piper and mock-glared, throwing up her hands. “You Harlands are a pain the rear!”

Piper smirked and tipped her head at Siobhan the mannequin. “Look, Ben’s first.”

Kezia turned back to the main event. Ben’s gaze locked with hers and she sucked in a sharp breath.

“Are you ready?” Old Smitty, one of Oban’s more colorful characters, stood beside Ben with someone’s iPhone in his hand.

The crowd roared approval, and a loud wolf-whistle pierced the air.

“Well, I’m blinkin’ not—stupid gadget.” Old Smitty lowered the hand he’d raised to start the contest and jabbed the cellphone’s screen. “Who can work this?”

“Kezia can.” Piper bulldozed her forward.

“Hey!” Kezia squeaked and tried to retreat, but Old Smitty grabbed her wrist with a grin.

“Round of applause for our new ref and timekeeper!”

The crowd whooped and whistled.

She could’ve dug in the heels of her flip-flops and refused. But after lecturing Ben earlier, refusing seemed childish. So after a half-hearted bow to her audience, she relieved Old Smitty of the iPhone and reset the stopwatch function.

The other competitors gathered around, heckling him. Ben swiveled and scratched his eyebrow with a raised middle finger.

“Better check Ben’s left hand is secure, ref,” Piper called from the front of the crowd.

The corner of Ben’s mouth curled. Kezia angled her weight backward to confirm Ben’s hand remained tucked into the back pocket of his jeans.

Kezia schooled her mouth into a neutral line. Drooling would be bad. Very, very bad. “Acceptable.”

More like delectable. The faded denim snuggled against the taut curve of his rear end. Not that she gave the shape of his butt any undue attention. She studied the iPhone’s screen, though the three columns of numbers could’ve been Arabic numerals for all the sense they made. “Just keep your hand there the entire time.”

“Siobhan will be disappointed,” she muttered.

Kezia bit her lower lip. She needed to get this done and somehow maintain her immunity to the testosterone pumping off Ben.

She hovered a finger over the green start button, pasting on a broad smile. “All right ladies and gents, contestant number one is ready. On your marks, get set…go!”

Ben snaked his right arm around the mannequin, but his broad shoulders blocked Kezia’s view. The bra sprang free in six seconds and the crowd surged forward to congratulate him. Kezia jotted down the time on the clipboard Old Smitty handed her, then politely applauded with everyone else.

After accepting more backslaps, handshakes, and the odd lewd comment, Ben walked toward her. Her grip on the clipboard tightened with each step he took, until the wooden corners dug into her palms. He moved like a much smaller, lighter man. A runner or a gymnast—all coiled power that could switch from casual swagger to lightning-fast action in a heartbeat.

She licked dry lips as he stalked closer, a witty response swallowed by the slow burn kindling low in her body. Both English and Italian deserted her, and she simply drank him in. Too good-looking, too confident—too much of everything that eroded her determination to resist him.

Bracing her spine as he stood alongside her, she waited for the punch line or another double entendre.

But he said nothing.

Just gazed down with a small half smile. Which was another word for a smirk—a baby, you know you’re impressed smirk.

She fanned herself with the edge of the board. Did she need a reminder of why she hated Alpha males? After growing up in a home full of five bull-headed Alpha brothers, no, she did not.

Ben’s arm brushed hers as he moved to let Noah past. Beneath her summery dress, her nipples puckered against her lacy bra cup.

Kezia hugged the clipboard to her chest and closed her eyes. Please St. Paula, let the clipboard base be wide enough to cover my boobs.

A soft, rumbling sound next to her—Ben chuckling.

Sweet Mother! Had she spoken out loud? A quick glance confirmed her worst fears unfounded. Ben stared blandly into the crowd, as if he had no idea how much his closeness affected her.

Honestly, she should ask the Patron Saint of Widows for more than boob coverage. She needed strength—brute strength—to resist either the urge to murder the man, or the almost-as-terrifying urge to jump his bones until he begged for mercy.

Melting Into You Swag pack:

* Melting Into You hand-crafted paua and bead earrings

* Melting Into You hand-crafted bookmark

* Melting Into You Magnet

BONUS: Sign up to my monthly newsletter as one of the options to get a free e-copy of Melting Into You! Win-win!!

This site uses Akismet to reduce spam. Learn how your comment data is processed.